Life On The Tour Bus 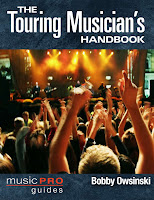 Ever wondered what life is like on a tour bus? Here are a few stories and tips from Chapter 10 of The Touring Musician's Handbook

that illustrate that life on the bus may not be what you pictured.
-----------------------
As stated in Chapter 1, the tour bus is looked upon as the mansion on the hill. It holds a unique place in the minds of concert goers and musicians everywhere, but when it comes right down to it, it’s just a way to get a bunch of people from point A to point B as comfortably as possible. The definition of comfortable, however, is in the eye of the beholder. Let’s take a look at life on the bus.

The Bus Itself
Most tour buses are laid out the same. There’s a small front lounge (see Figure 10.3), a larger rear lounge, bunks for either 8 or 12 people, a galley, and a bathroom with a shower. Most also have a satellite television in both lounges as well as a DVD player and sound system, wireless Internet, and maybe even an X-Box or other gaming device. Many now have iPod docs as well. 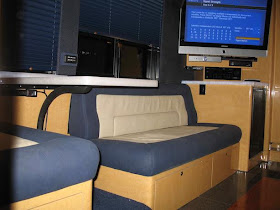 The rear lounge can usually be reconfigured as a twin or queen size bed as necessary. There are multiple air conditioning zones (up to four on some buses), so there’s usually at least one area that you can find that has a temperature you’re comfortable in. The bus also has a generator so you’ll have plenty of AC power for plugging in laptops and anything else requiring external electrical juice. Most bunk areas are small, but many have a flip-down television, a DVD/CD player, and their own power outlets.

If the artist and the band share the same bus, it’s not uncommon for the artist to commandeer the rear lounge, even though it’s supposed to be for everyone (you better knock before trying to enter). Someone might even sleep back there if they’re claustrophobic in a bunk.

Life On The Bus
Because you share such tight quarters with seven to eleven other people, it’s very easy for tempers to fray. That’s why everybody has to be on their best behavior, no matter how difficult that may be. Because you can offend someone without even knowing, you have to be extra considerate of everyone on the vehicle and respect their physical space and personal belongings. Keeping yourself and your area clean and dumping the trash at every stop goes a long way to keep from setting off anyone’s phobias or quirks.


“Traveling by bus with eight other people is not something everyone can deal with.You have to have a certain type of personality to handle the intimacy and lack of privacy. The bus is close quarters, you can't walk down the aisle without bumping into someone, you can't sit alone anywhere without there being noise and a conversation, maybe someone watching a movie or listening to music. It's difficult to read because there are too many distractions and there is literally nowhere to go except to your bunk, which is about the size your coffin will be when you die. You have to be extremely cool and conscientious of others and hope they will be the same to you because it can be completely psychologically draining.”
Sue Foley

"As far as the bus goes, you never want to leave any of your stuff out in the aisle. When I started touring, they told you once to put your shoes in your bunk and if you didn’t listen, the next morning they were gone. You always want to clean up after yourself and you don’t want to go to sleep leaving your beer bottles or food out."

You also have to take into consideration the opposite sex if you have a mixed male and female band. Women have different needs and a different energy from guys, which changes the dynamic of the behavior on the bus dramatically. Surprisingly, it tends to get mellower as the testosterone levels seem to decrease.


"I know this is going to sound really old school but I always bring a book because sometimes when you’re on the bus with a lot people crammed in, the chances of having some kind of unpleasant discourse between band members or management or crew is pretty high. The longer you’re out, the less sleep you have, and the more you see the differences in personalities. It’s inevitable that there’s going to be a blow-up. I always want to have an escape or a self-defense to get out of those social situations which can go bad and lead you to losing your gig. Burying yourself in a book is a good way to stay out of those situations."
Ed Wynne

Is it a smoking bus, and does that bother you? How much are recreational drugs or alcohol a part of your touring life? Can you sleep on the bus? These are the things you must ask yourself before you take the gig.

TIP: Buy a cheap pair of slippers just for the bus. They’re easier to slip on and off in the tight quarters of your bunk.

You can read additional book excerpts for this and other books on my website.

Don't forget to check out my Music 3.0 blog for tips and tricks on navigating social media and the new music business.
Bobby Owsinski at 9:36 PM
Share